Members of the equestrian community came out in force in October 2016 to remember local lady Melissa Lacey and raised over £1,750 for Alice House Hospice.

October 31st saw the culmination of months of preparation when owners and their horses made the trip to South Durham Saddle Club’s indoor arena in Dalton Piercy to compete and remember Melissa, who died earlier in 2016 from a rare form of cancer. Her journey from diagnosis to death was followed every step of the way by her friends as she kept her Facebook page updated with her news.

Anneli Davidson, a close friend of Melissa’s and Secretary of South Durham Saddle Club, organised the show with the help of friends and members of the Saddle Club. 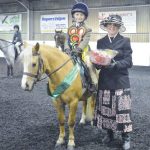 Reserve Champion and Judge at the Memorial Show

Anneli said,“All the classes were sponsored by local people and businesses, rosettes were donated by Greer Smith from Equisentials in Billingham, trophies were also donated and a huge raffle and pre-show online auction ran, all with donated prizes. The judges and stewards gave their time freely and local business Gelato Jojo’s donated their food and services to cater for competitors and spectators throughout the day.  It was an amazing day and something that we should all be really proud of; Mel would have loved it! So many people remember Mel fondly and this was apparent at the show; she inspired people. We have already been asked when the next one is so this is something that we hope to run each year.”

The turnout was outstanding with over 200 competitors in 24 classes, many of whom had never shown before; there were entrants young and old and horses of all shapes and sizes. 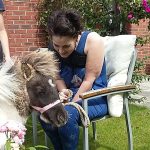 Melissa and her namesake Lacey

Melissa had spent time in Alice House Hospice on two occasions, both for symptom control and for end of life care. On one occasion Anneli brought her two Shetland ponies in to visit, one of whom was named after Mel; Olive and her foal Lacey spent time with Melissa and her family in the Hospice gardens on a gorgeous sunny afternoon. Horses were a big part of Melissa’s life and it was a big emotional boost to her that day.

Anneli continued “Mel was a very brave lady, she was determined to achieve as much as she could and to make as many memories as possible before she died. She frightened me sometimes as she took on some of her challenges, but it was an honour to be part of her journey.”

Tracy Woodall, Hospice Chief Executive, said “It sounds like this was a great day and that Melissa was a popular lady. I would like to say well done and thank you to everyone who took part and helped to organise the day. The support of the local communities it extremely important to the Hospice and events like this help to ensure we can continue providing our services, free of charge to those patients and families who need them.”