Members of Hartlepool Golf Club are celebrating a milestone in fundraising for Alice House Hospice, having raised over £100,000 for the charity in just ten years.

The Hospice has a long-standing partnership with the club and is current Captain Clive Harbron’s nominated charity for 2019-20. This nomination follows many of Clive’s predecessors who have recognised the work of Alice House and pledged their support. In addition to this, members of the club have been involved in various fundraising initiatives over the years, in particular the Great North Run. 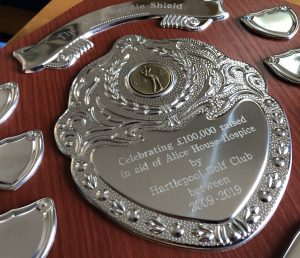 To commemorate this success, Hospice fundraisers decided to present the club with an award; Clive and former Captain Neil Ashby came up with the idea that this could take the form of an annual shield, for which members would compete every year. It was decided that the shield would be called the Alice Bendle Shield, named after the Hospice’s founder.

The first Alice Bendle Shield competition took place on 6 October and was won by Anthony Forster; the shield was formally presented to the club by The Hospice’s Corporate Fundraiser Greg Hildreth on 20 October.

Greg said “This is an incredible amount of money to have been raised in a relatively short space of time. The club along with its past captains and members have shown a huge amount of warmth and support to local Hospice care and it has been an absolute pleasure working alongside them over the last ten years. I hope that this partnership will continue long into the future.

It is fantastic that the members wanted to recognise this success by doing something in memory of Alice Bendle; it is a lovely tribute and I would like to thank everyone at Hartlepool Golf Club, on behalf of all at Alice House.

I would also like to say a special thank you to Clive and wish him all the very best for the remainder of his term as Captain.”