#VirtualPubCrawl goes from strength to strength

#VirtualPubCrawl goes from strength to strength

The fortnightly online gathering has now raised in excess of £3,000 for Alice House Hospice.

Every other Saturday, followers of the event all meet virtually for music, drinks and chat using the hashtag #VirtualPubCrawl and following Rob @indierob9 Those taking part all listen to the event’s radio show on digital station Radio Free Matlock, whilst sharing videos and selfies and chatting with each other on the social media platform.

The event has attracted followers and listeners from all over the UK and around the world, as well as trending in the UK’s top 10 Twitter hashtags each time it happens. 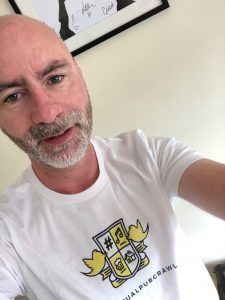 The idea came to creator Rob when he was unable to go out with friends over Easter Bank Holiday due to lockdown when he started the get together himself with his Twitter followers. The event’s audience quickly grew and Rob decided to help Alice House after hearing about the cancellation of many of their fundraising events, in particular their annual Beer Fest & Hootenanny at Hartlepool Rugby Club, which he has attended in the past.
Followers of the #VirtualPubCraw started to donate after Rob created an online giving page. Following this, people began to organise their own fundraising activities including raffles, auctions and even a sponsored run, with all the money being donated to Alice House.

The event was also sponsored by Exwold Technology, who were due to sponsor the cups at the cancelled Beer Fest.

Deputy Fundraising Manager at Alice House, Greg Hildreth said “Since being named as the #VirtualPubCrawl’s charity, we have been overwhelmed with lovely messages and kind support from so many people, many of whom would probably have never heard of Alice House. These donations are so valuable and help to provide care to patients and families who have been affected by incurable illnesses.

This support is needed more than ever, with so many of our usual fundraising projects being either on hold or severely compromised because of the Coronavirus Crisis.

As for the event itself, it’s a pleasure to be a part of and I’m really looking forward to the next one.”

The next #VirtualPubCrawl takes place on 20 June at 3pm, with pre and post event shows on Radio Matlock from 1pm.

There will also be a picture quiz and prize draw to win drinks prizes and music merchandise, all of which has kindly been donated.