Twitter’s fortnightly #VirtualPubCrawl was created by Hartlepool man Rob Dignen and has grown beyond his expectations, reaching people around the world and raising over £6,000 for Alice House Hospice.

Rob started the virtual get-together over Easter Bank Holiday, when he would have normally gone out with friends and it quickly took off with people from all over the UK and beyond who have enjoyed sharing music, selfies and speaking together on Twitter.

Soon, internet station Radio Matlock became involved, with presenter John ‘Redders’ Redhead hosting the official #VirtualPubCrawl show alongside the event between 3-7 every other Saturday. The programme includes indie and Britpop hits, forgotten gems, listener requests and brings everyone together on the day.

Designer Russ Purdy of Brands in the Air also became involved and created the event’s branding and popular merchandise including bucket hats and t-shirts.

In May, Rob decided to link the event with Alice House Hospice, a charity close to his heart. From there, people participating in the #VPC have been encouraged to donate to the Hospice and many have supported by organising their own fundraising activities, including Rob who arranges a prize draw at each event, in which people can win a large prize bundle, all of which has been donated.

Initially, Rob and fundraisers at Alice House set a fundraising target of £500 to offset a fraction of the forecast £6,000 that would be lost from the charity’s Hootenanny & Beer Fest event which had just been cancelled.

In just two months, the #VirtualPubCrawl has generated over £6,000 making a huge difference to local patients during a time that continues to be very challenging for charities.

Rob said “It’s just incredible. The effort and generosity is amazing, I’m blown away by it and really pleased that we have covered the money that Alice House would have missed out on from the cancelled Beer Festival. Thanks to everyone for their support.”

As the event has grown, music fan and #VirtualPubCrawl follower Sam Shiner joined the team and now presents her own ‘VPC Introduces’ show from 1-3 each Saturday before the main show. This was a hit with listeners from the start and both Sam and Redders help promote the fundraising on their programmes.

Sam said “I was delighted to be asked to be the host of the new music radio show on Radio Matlock as part of the Virtual Pub Crawl. I had never hosted a radio show before, let alone produced one, so the last six weeks have been a really great learning experience. From 1-3pm on Virtual Pub Crawl day, I play brand new music from some of the most exciting upcoming and unsigned bands as a warm up for the main show with Redders at 3pm.

We have had such an amazing response, not only to my new show but to the entire Virtual Pub Crawl. It’s wonderful to have people joining in from all over the world, quite an unbelievable achievement. And I am so happy we have tied the show into raising money for Alice House, it is a fantastic cause and we have exceeded expectations. Everyone who has donated money or prizes for the raffle has been so generous and the VPC team and I are so grateful. 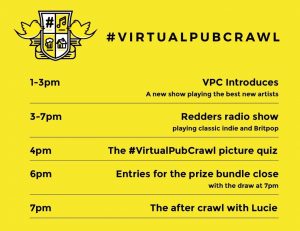 I will be on Radio Free Matlock from 1-3pm again this Saturday 18th July, bringing more amazing new tunes!”

Greg Hildreth of Alice House has been taking part in the #VirtualPubCrawl at home with his family and said “The kindness of everyone involved is just phenomenal, the amount of warmth and goodwill that this event has generated during a very difficult time is such a lovely thing; it’s great that people have a good time on the #VirtualPubCrawl and see this as an opportunity to help others.

Massive thanks from everyone here at Alice House to for all your kindness and I’m sure Saturday will be another great day.”