June tells us about the Long Term Care Team

June tells us about the Long Term Care Team

“I’m 87 years of age and am being supported by the Hospice’s Long Term Care Team, everyone at the Hospice is lovely, like a big extended family!”

“I first knew about Alice’s idea of a potential hospice when I was invited to a meeting back in the early 80’s.

June as a District Nurse

As a District Nurse at the time I understood the community need for hospice care and agreed with the idea, I had even worked with two of Alice’s daughters previously, Paddy and Margaret.

Over the years I nursed both my eldest sister and my mum at my home, continued to work as a District Nurse had 4 children in 6 years, including twins!

“One year ago today, my mum was admitted to the Hospice. Dr James asked her what did she want from her time in the Hospice and she replied, “I just want to be cared for and to go quietly!”

Well one year later her quality of life is amazing, what she lacks physically she more than makes up for mentally! She thinks of you all as one big family and I know she feels safe and comfortable about what the future holds.

As a family we won’t ever be able to thank you all for all that you do!” 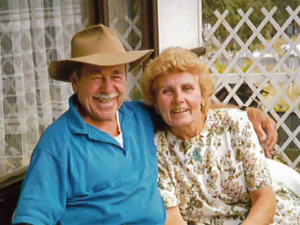 June and her husband, Edgar

Life was busy for my husband and I but after I retired in the early 90’s I wanted to Volunteer at Hutton Avenue.

I told the Volunteer Supervisor, Joan, at the time – I will do anything except nursing.

I was given a position of Receptionist on an evening shift of 6-9pm and volunteered for about 5 years. I also enjoyed helping with the Coffee Mornings we held in St Joseph’s Hall.  My daughters dog pulled me over and I hurt my arm which restricted some of my movements so in the end I had to stop volunteering but I really enjoyed my time at the Hospice in Hutton
Avenue.

Now I am 87 years of age and am being supported by the Hospice’s Long Term Care Team, everyone at the Hospice is lovely, like a big extended family!”