On 24th October 2019, the #TeamSally 12-in-12 Challenge Series was started, with the goal of raising funds for Alice House Hospice.

"Many thanks to Gavin Wise of Wise Financial Consulting for sponsoring the series, Greg Hildreth and all of the Fundraising team at Alice House Hospice for their support, every organisation that made this all possible, every person who participated in an event and finally, the many folk who sponsored people, bought raffle tickets or artwork"

THE STORY OF THE CHALLENGE SERIES

All was going to plan in the first six months with a Pumpkin Night, Quiz Nights, #SallyRun, XBorder Challenge 10k, Cycle a Marathon, Shindig and Shenanigans St. Patrick’s Night and a Run to Infinity Marathon all taking place, but on 23rd March, the country went into Coronavirus Lockdown.

From that date plans were adapted so that the fundraising could continue safely and in some cases, virtually.

A small group completed the #TeamSally Hospice Purple Week Run, (socially distanced) and Phil did runs throughout April that equated to three marathons. A raffle was organised, which brought much needed finances into Alice House Hospice, which was losing over £15,000 per week due solely to the enforced closure of its retail outlets.

In May, as the Windermere Marathon had been cancelled, Phil ran a marathon, accompanied by friends at different stages.

The virtual Blaydon Race and the Great North 10k were completed by a small group in June, but the outstanding event of the month was the annual Summer #Sallyrun in which people completed their own 5k journey and were sponsored by friends. This event went global, with people taking part in Columbus, Ohio, the Irish Republic and Scotland, as well as in many places throughout England.

Before lockdown, a townwide sponsored walk had been organised for 50 people, but this was now out of the question. Instead, Phil and long term #TeamSally supporter, Steve Bell, completed the route and held a raffle with prizes collected from local pubs en route.

In July, Phil and his wife Gillian researched and produced five family walking quizzes, around town, which unexpectedly raised over £900 as people bought them to be done with family during the Summer Holiday.

In August, after the cancellation of another X-Border 10k, a small group ran from Norton-Yarm, crossing the old Durham-Yorkshire border. Cheeky artwork was designed by Gillian, in the wake of someone’s trip to Barnard Castle, and sold to benefit the Series total.

Since #TeamSally was established in 2014 in tribute to Phil’s late wife, who tragically died in a road traffic accident in December 2012, an annual Music Day has always taken place. Despite restrictions, a live streamed gig featuring Pek and Wanley took place in August, which was well supported.

The following month should have seen the 40th Great North Run, but September brought no relaxation to Coronavirus rules and #TeamSally had to settle for a virtual run, involving many people, doing their own 13.1 mile run and raising money on behalf of #TeamSally in aid of Alice House.

To round the year off, Phil completed the Langdale Half Marathon in the Lake District and an alternative Hospice Colour Run exactly a year after the Pumpkin Show. 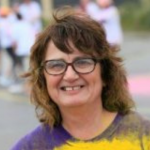 Janice Forbes, Community Fundraiser at Alice House “A huge well done to Phil, who is a true inspiration.  This is a fantastic amount that he has raised in such a strange and challenging year.  Phil is already planning his next 12 in 12 challenge and we wish him the very best of luck.”

#TeamSally have already started to fundraise for the next 12 months, so if you can take part or sponsor a participant in any of their events, rest assured that every penny raised will go directly to support the work of Alice House Hospice.