The organisers of an annual fundraising event have continued to support Alice House, despite their event being cancelled last year due to the pandemic.

The Liam Gough night, is held every November at Rovers Quoit Club in Hartlepool, in aid of Alice House and its thirteenth event would have been due to proceed in November 2020. 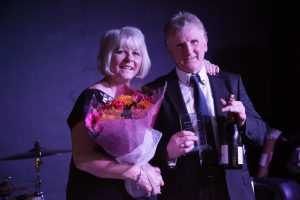 John and partner Ann Bates with their Outstanding Contribution Award – 2017

The event is organised by local man John Gough and his partner Ann Bates and is held in memory of John’s brother Liam and his sister, Angela O’Hara. The night is usually a sell out and includes live music, raffle, auction and other activities; it has so far raised approximately £27,000 for the local charity.

In 2017 John and Ann were presented with an Outstanding Contribution Award from Alice House.

John and Ann are long term supporters of Alice House and still wanted to raise some money, despite current restrictions so they decided to ask for donations from friends and family, collecting £900 which was given to the Hospice in early February.

Senior Communications Manager Greg Hildreth, who normally attends the event said “We were delighted to hear from John and Ann, who have shown great dedication by raising a fantastic amount of money, despite being unable to proceed with their usual plans.

This is massively appreciated and as always, the money will be used to support local patients and their families. Sending huge thanks to John, Ann and family and all who supported them. This takes their fundraising total to around £28,000 which is an incredible amount of money.”

They also included a note to Alice House which read “We hope this will help with costs to keep our wonderful Hospice going.”