“My heart is smiling. I feel like I’m in a hotel!”

Chloe Whaites tells us about her mother-in-law, Jan’s time in Alice House Hospice.

“On Christmas Eve 2019, after ongoing back issues, our Mother-in law and centre of the family, Jan, was diagnosed with secondary cancer."

"Each and every member of staff made us feel like Alice House was our home."

“It was definitely not the news we were expecting as Jan wasn’t even 60. She had her own side room on an orthopaedic ward in North Tees Hospital whilst staff decided on her pathway of care and also managed her pain. Although Jan was disappointed to miss Christmas Day with her family, she was hopeful that she was in the right place and would fight with everything she had to spend the following Christmas with us all.

Over the month that followed, both ourselves and Jan were concerned that she simply wasn’t in the right place for the specialist pain management and care she needed and this was affecting her usually positive mood.

Hesitant to mention the word hospice, as most people associate this with end-of-life care, I spoke of how an aunt of mine who is still with us was cared for in Alice House when she was having treatment for lung cancer; it is not just a place for end-of-life care but somewhere she could stay until she was well enough to come home. Jan hadn’t been aware of this and she welcomed it with open arms; within a day of speaking to the doctors about this option, Jan was offered a room in Alice House.

The day Jan was transferred to Alice House Hospice, the joy on her face was something we will never forget. “My heart is smiling” said Jan to one of the friendly nurses, “I feel like I’m in a hotel!” Within hours, Jan had settled in and was the most comfortable we had seen her in a long time. She was closer to home and the best thing was that we could visit any time we wanted, meaning more precious time with her grandson, Elliot.

Not too long after Jan was transferred to Alice House, we were told the devastating news that unfortunately Jan’s cancer had spread more than initially thought and that she would only have a few months. Met with Jan’s optimism and positivity, she wanted to spend her last few months surrounded by her family in the place that she had loved from day one.

Following this news, Jan’s son Gav and his fiancée Nic had decided to bring their September wedding forward to the 14th March, having an intimate family ceremony that Jan could attend. What everyone else knew that I didn’t, was that Jan’s other son, my partner Glen, was planning a surprise proposal. At the end of February on a trip to Edinburgh with the help of Nic, Gav, Jan and Graeme, Glen got down on one knee and asked me to be his wife. We sat in a café and, before the proposal had time to sink in, he asked if I’d marry him in a double wedding in two weeks. 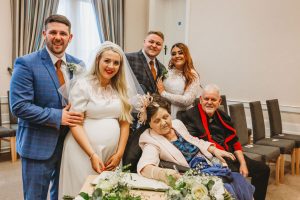 Jan, surrounded by her loving family at her son’s double wedding.

As the four of us entered the Hospice after our trip, we were congratulated by all of the staff who had grown to be like our extended family. Within the two weeks that followed, each and every member of staff made us feel like Alice House was our home. We hosted a mini hen party, a baby shower, gender reveal, games nights, sleepovers and both Glen and Gav sat and played on the PlayStation in the family room like a pair of teenagers. But most importantly, the staff were helping to put plans in motion to make sure Jan could attend the double wedding.

On the morning of the wedding, no one was sure Jan would get there, but the staff of Alice House went above and beyond to source Jan a special wheelchair and transport to get her to the ceremony. Jan was even given a standing ovation as the staff lined the corridors beaming with pride at Jan’s strength and resilience. Later that day, sitting in the front row, Jan watched her two sons get married, side by side.

On Saturday the 21st March 2020, one week after the wedding, our beautiful Jan passed peacefully away surrounded by her family. Jan was only in Alice House for three months but they helped to make her last three months so full of beautiful memories and her heart smile until the very end.”