“Mum was born in Constantinople in 1910 – a British Citizen – just before the Turkish uprising, when she was refugeed with the rest of her family to Hull. Mum had 4 children, Margaret, Paddy, me and Robin, within 5 years – which meant a lot of hard work for her, but great for us kids! 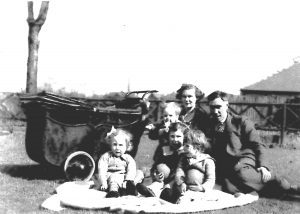 She was never idle and worked voluntarily with infant classes in schools, Rangers and Brownies (I know that before she married she was involved in the Queen Mother’s Brownie pack).

During the war she ran a Sunday school for the children on the estate where we lived and we adopted a Prisoner of War (POW), sending letters and food. She helped with the Air Raid Precautions (ARP) and was the rehabilitation officer in the Women’s Voluntary Service (WVS) for families and children evacuated to York from London. We loved air-raid nights because we had our ‘shelter’ behind the piano and she used to tell us stories to keep us from being scared.

She had a tremendous capacity for hooking things out of the ether as it were, and I think this contributed to her ability to see something missing and to find an answer. This came out more when we moved to Hartlepool just after the war had finished. She started the Fellowship of Young Congregationalists and the Sea Rangers. 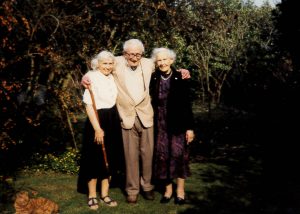 Many people came to her with their worries, concerns, broken lives and bodies, and she never turned anyone away.  She was not fooled by falsity and would speak out for the truth. She had a great sense of fun too, and she could make events really exciting.

Mum’s work with the Hospice came after she has been wheeled into a sideward after an operation and left to die (this is to my understanding) and the thoughts which went through her mind during the next few hours were enough to lead her to avowing that she had been given this experience as an opportunity to understand the problems of people who were facing death without any help, alone and in pain.

After she was better (an operation to lance an abdominal abscess was carried out later that night) and after much reading and research, she gathered a group of 10 people to plan and establish our Hospice. Throughout this achievement, and those which went before, Mum never ‘went it alone.’ She drew to her those people who were genuine and they gave their time, talents and money back to her. She was able to see both the ‘big picture’ and the detail – a rare and lovely gift which she made full use of. 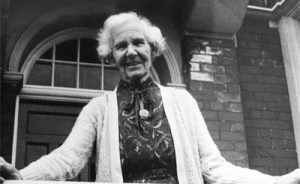 One time, when the builders were laying the patio outside the Day Hospice sitting room, she did not like the big walls they were putting around the flower beds. When they had gone home for the night she took one of their hammers and knocked the offending structure down! The next day they put edges to the centre beds and she was satisfied.

She loved children and for those who were enthusiastic about the Hospice she started a magazine with stories and competitions.  She led the Hospice Management Committee in such a way that everyone felt useful, important and valued for their contribution.

She shared her vision of the Hospice with both the volunteers and the public who were firmly behind her, especially after she had spoken at a meeting (and she had lots of invitations to do so) firing up the members to support the appeal and to look at the venture as their own.”

What more can I say?

“Only that Mum did not want to stop there. She was universally loved for her wisdom, her capacity to heal, her sense of fun, her ability to draw out the best in people and for her spiritual understanding. (and lots more I think!). It will be many years before some memory of herself and her work will be forgotten in Hartlepool.”