Fiona Hardie tells us about her husband's time at Alice House

"My husband Richard was diagnosed with bowel cancer in June 2020, following emergency surgery. He had lots of post-op complications and had to undergo a second major surgery one week later. He was discharged from hospital with multiple medications and ongoing symptoms.

Following an appointment with the Palliative Care Team, Richard was referred to the Hospice towards the end of July for assistance in managing his medications and symptoms.

I work for the NHS and was immediately impressed by the way the Hospice staff were interested in what Richard’s needs were, both from a medical aspect to get his symptoms under control and also from a mental health point of view. He was looked at as a whole person, rather than ‘just’ a cancer patient.

Despite being busy, the staff appeared to have all the time in the world to spend with him.

The choices of meals he was offered helped him to regain his appetite. The staff in the Hospice made an effort to learn all of our names. 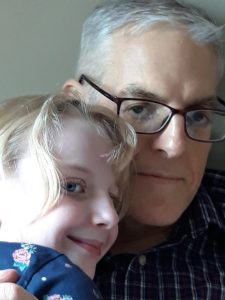 Being ill in a hospital in Covid times means visiting is restricted and he was not allowed to have any visitors for the three weeks he was in hospital in June. Within the Hospice however, Richard was able to have a small bubble of family and friends who could visit; Richard was also able to come home for a few hours each day, which helped him and us massively.

All of us in his bubble of visitors all commented on the lovely atmosphere that was present at Alice House. Our then ten-year-old daughter, Scarlett was very comfortable visiting her Dad in his room, enjoying sweet treats and conversation with the nursing staff, who always gave her a warm welcome.

As Richard’s condition unfortunately rapidly progressed, the team were extremely good at coordinating all of his care, liaising between multiple hospitals, departments and specialites and attending meetings within the hospital to input into his overall management plan.

At the same time the Hospice team were realistic in the information they shared with us.  Whilst I have not yet needed to take up the offer of ongoing support after Richard sadly passed away at the end of August, it is comforting to know the support is there for the whole family.

Just a couple of weeks after Richard was admitted to the Hospice, I celebrated my fiftieth birthday.  Richard was able to come home for a couple of hours for my lockdown birthday, which meant a lot to Scarlett who planned the day for us.

Instead of receiving gifts I set up a fundraiser via Facebook to raise some money for Alice House; I hadn’t up until then realised that Hospices were funded differently to the NHS.

Richard had attended the Hospice once before to present a cheque on behalf of the Hartlepool Model Railway group, of which he was a member. The whole family also make regular donations to the Hospice shops. 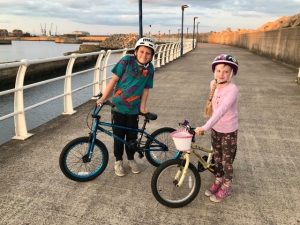 In lieu of flowers at his funeral, we asked for donations to the Hospice. Scarlett and one of her friends, Benjamin, have previously collected donations for Hartlepool food bank & she did the Boxing Day dip in 2019 for Cancer Research.

Scarlett wanted to do the ‘On your bike challenge’ last October as she says she felt she owed the hospice for the great care her dad had received and wanted to give something back. She and Benjamin cycled 102 km in October & raised £1,000 between them.

Whilst I wouldn’t want any family to have to go through an experience like ours losing a husband, dad, son, brother, uncle, brother-in-law, son-in-law and friend, so quickly, we really hope that the money raised should help other patients and their families receive the same great care and support we received.”