An online fundraising phenomenon from the first lockdown launched its first live event and raised even more money for charity.

The #VirtualPubCrawl started as a bit of fun over the 2020 Easter Bank Holiday by Hartlepool man Rob Dignen. Whilst at home, Rob started to post links to songs on Twitter and used the hashtag, which soon started trending. 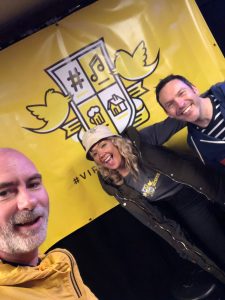 Soon, the #VirtualPubCrawl became a fortnightly online get together during which like-minded music fans across the UK and beyond were treated to a special radio show on Radio Matlock during each event and given the opportunity to connect with others and share photos, whilst being at home, creating something close to the experience of a night out when such a thing was not possible.

As the online community grew, its attention turned to raising money and nominated Alice House Hospice in Rob’s home town of Hartlepool the #VPC’s main charity. The initial plan was to raise £500 to offset some of the financial losses incurred from the cancellation of the Hospice’s annual Beer Festival. During each event, Rob and would host a raffle and quiz and listeners would make donations online, with some organising their own additional fundraisers too.

The event also received its own logo and branding, devised by Russ Purdy of Brands in the Air, who helped with promoting the #VPC throughout its run.  Over the course of 12 events throughout 2020, the #VPC raised a staggering £8,500 for Alice House, which completely exceeded Rob’s expectations.

At the time, Rob said, “It’s unbelievable, who knew something so silly would go this far? It’s just incredible. The effort and generosity are amazing, I’m blown away by it and really pleased that we have covered the money that Alice House would have missed out on from the cancelled Beer Festival. Thanks to everyone for their support; I’m so proud.”

After this success, a live #VPC event was planned and postponed a number of times as restrictions continued throughout the pandemic. The event finally took place in Manchester in a venue called Attma on 5 February. The event was a sell-out and attracted #VPC regulars from all over the country, including many who had made online friendships and were meeting in person for the first time. 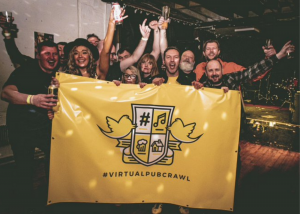 The night had live music from Pretty Mafia, Liam Hillyer, DDEs, The Cavs, Columbia and was headlined by Citylightz. There were also DJ sets from #VPC radio presenters Redders and Sam Shiner, followed by a late-night indie disco from Listen Up Music who helped organise and promote the event.

There was a raffle on the night, organised by Sam, which when combined with ticket sales meant that the event generated a further £2100 for Alice House, taking the #VPC running total to approximately £11,600. Further events are planned for 2023 and beyond.

Greg Hildreth, Communications Senior Manager at Alice House said, “The success of the Virtual Pub Crawl and the community it has built during really hard times has been genuinely amazing and uplifting. The fact that this was used to support a local charity, during it’s most difficult and uncertain period is testament to Rob and all those who got involved.

This money has made a very real difference to the lives of Hospice patients and their families; on behalf of everyone here at the Hospice I would like to send massive thanks and congratulations on their tremendous contribution.”

It’s also great to hear that there are plans for future events and I would like to wish everyone all the best and every success in the future.”